Most competitive events sponsored by the AKC are dog shows, where the accent is on conformation. 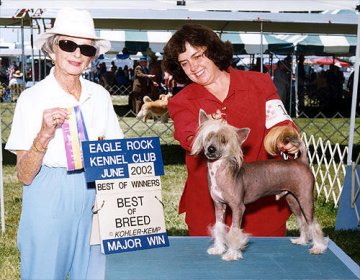 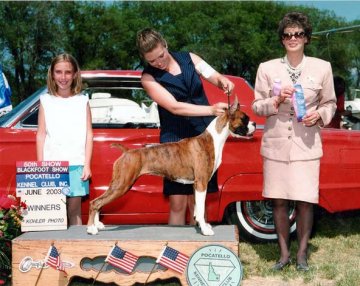 To be eligible to enter, a dog must be registered with the AKC (American Kennel Club) and at least six months old on the day of the show. Spayed or neutered dogs are only eligible to be shown in the Stud Dog or the Brood Bitch class.
Dogs with disqualifying faults as described in their breed standard are ineligible.


There are six regular classes in which dogs seeking points may compete.
Dogs that are competing for points are frequently referred to as class dogs.

The six regular classes are as follows:

Puppy Classes: normally subdivided into 2 classes according to their age.
6 to 9 months old  and 9 to 12 months old.
12 to 18 Months Class:
Novice Class: dogs that have no points toward their championship and have not yet won three first places in  the Novice Class; or dogs that have not yet won first place in any but the Puppy Class.
Bred by Exhibitor Class: dogs must be owned or co-owned by any one of the breeders of record or their spouse and they must be handled by the breeder of record or a member of their immediate family.
American Bred Class: as the name implies, the dog must have been bred in the USA.
Open Class: dogs entered here may be divided according to size, weight or type and/or color of their coat.

Show dogs are competing for the points needed for them to become an AKC Champion.
To become an official AKC champion of record, a dog must earn a total of 15 points. These points are awarded based on the number of dogs in actual competition. The more dogs that compete on any single day directly affects how many points are awarded that day. The number of dogs required for total points awarded varies with the breed, sex and geographical location of the show. The AKC makes up a schedule of points each year to help equalize competition from breed to breed and area to area. Dogs can earn from zero to five points at any show. To earn one point the dog must beat at least one other dog of its breed, if there is only an entry of one dog, no points will be awarded. A win of three, four or five points is called a major. The 15 points required for a championship must be awarded by at least three different judges, and must include two majors won under different judges.

There is no intersex competition in these classes; dogs compete against other dogs, and bitches against other bitches. Only one male (dog) and one female (bitch) of each breed can win the points at a show.

Judging in every breed proceeds along the same lines.
After being examined, dogs are placed according to how well that day's judge thinks that they conform to their own breed standard. In each class the dogs are evaluated and placements are made for first, second, third and fourth. Only the first-place winner in each class remains in competition; the others are eliminated. 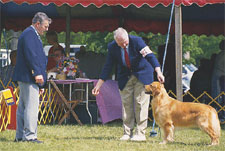 The same process is repeated in bitches, resulting in a Winners Bitch, the female that receives the points at the show, and a Reserve Winners Bitch is also selected.

At all-breed shows, this process of elimination takes place in every breed.

The next step is the Group judging. There are seven Groups categorized at all-breed shows. These Groups are the Hound, Sporting, Working, Non-Sporting, Herding, Toy, and Terrier groups. 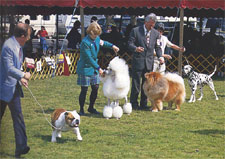 
Finally, the seven Group winners are brought into the ring and a Best in Show winner is selected.